‘Wellington Eclectic’, ref 2669 on our site, is a long-time favourite amongst the many treasures in the JJ Media location library. From In Style Magazine and The Observer, to more obscure and edgy titles, this versatile, eclectic Victorian London home has graced many magazines and commercials.

The location home and workplace to skilled crafts-people and artists, Rufus and Molly. Their imagination and labour has created an other-worldly experience to escape to, all within the footprint of their Bow abode. The location comprises of the house (built 1842, retaining many original features), the garden (which, uniquely for London, is its original length), The Factory (a working workshop and exhibition space for the unique collection of wares on the premises) and The Village (a village of sheds hand-built and furnishing by the owners).

Where did the owners acquire so many exotic, antique, and unusual items to furnish the property? ‘It mostly finds us these days,’ says Molly, commenting on how the location’s reputation as the place where such curiosities belong has secured them endless offers of quirky gifts that are hard to refuse. The location never stagnates, it is ever-evolving with exciting acquisitions being added regularly.

Molly and Rufus are a dedicated ceramicist and silversmith respectively; though they work across all sorts media, having many strings to their visionary bows, and frequently collaborate on projects. The film and photo shoots they host not only underpin a lot of their projects financially, but many have been the catalyst for the development of the property’s appearance, ‘There are hundreds of things on the “to do” list’, says Molly, adding that the project at top is usually prioritised by the demands of a forthcoming event which, ‘justif[ies] the time spent on it’. For example, the large kitchen table was assembled by Rufus in anticipation of a photography workshop hosted by at the property.

Many years of graft in ‘The Village’, the property’s shed mecca, earned Rufus and Molly a place as a contender in Channel 4’s ‘Shed of the Year’ series; we were delighted to see the location was featured in series three of the architectural programme. Presenter George Clarke and his team were so fond of the shed collection, that they’ve returned in the current series to stay a bit longer and present the programme’s links and series final from the location. Some of the props, such as the traditional red phone box were built specially for the filming by Rufus. 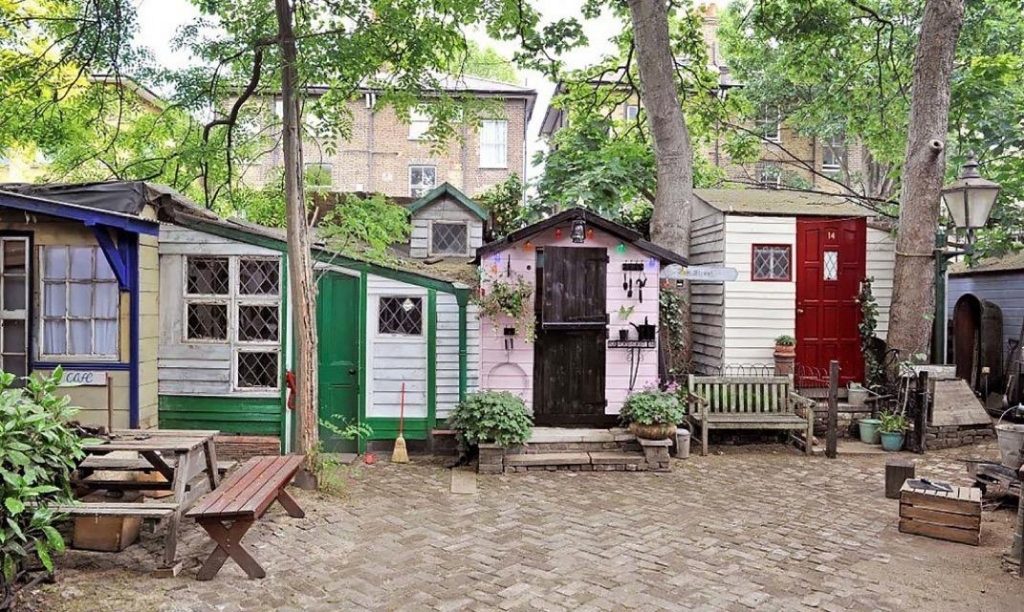 Finances and To Do lists aside, the owners genuinely relish hosting shoots of all shapes and sizes at the property, ‘It’s great to see our home from somebody else’s perspective,’ says Molly, ‘not just with their eyes, but with the lens too. It’s wonderful to see how the location looks when framed on TV or in a magazine’.

Crews don’t have to concern themselves with finding the right props for the shoot; Rufus and Molly are always on hand to help find the right prop in their impressive index of items. They can even provide their pets if required, ‘“#oboethegrumpycat” was featured in a shoot with actress Sophie Turner,’ reveals Molly. The cats have also been featured in other magazines, and their dog bagged a role in a recent campaign! And it’s not just the animals that have seen a bit of the action, Rufus is also a character actor/model, whose clown character (one of many characters in his repertoire) has appeared in several shoots and he has even featured on film playing an artist forging a Lowry!

The location is one of the most majestic spaces we represent as a shoot location; from the study of the Victorian-gothic house inhabited by a figmental mustachioed Victorian gentleman – identified by Molly as a man ‘Who likes hunting, whiskey, and John Buchan’ –  to the enjoyably immersive Workshop that offers room-upon-room of dreamy artifacts. This palace of creative treasures never fails to impress all who shoot there.

You can see ‘Wellington Eclectic in the current series of ‘Shed of the Year’ on channel 4.

Find the property on our library 2669

JJ’s got your back