Before the launch, we caught up with the artists (check out the article here), Dean Chalkey and Ciaran Osha to gain an insight into what we could expect and jumped at the chance to sit down and find out about the developments during the event.

Reverberation appeared a true success from the start receiving coverage from the likes of Elle UK who featured the exhibition on their ‘Things to do in London‘ article and described it as ‘Trippy, abstract and ground-breaking‘ – we totally agree! 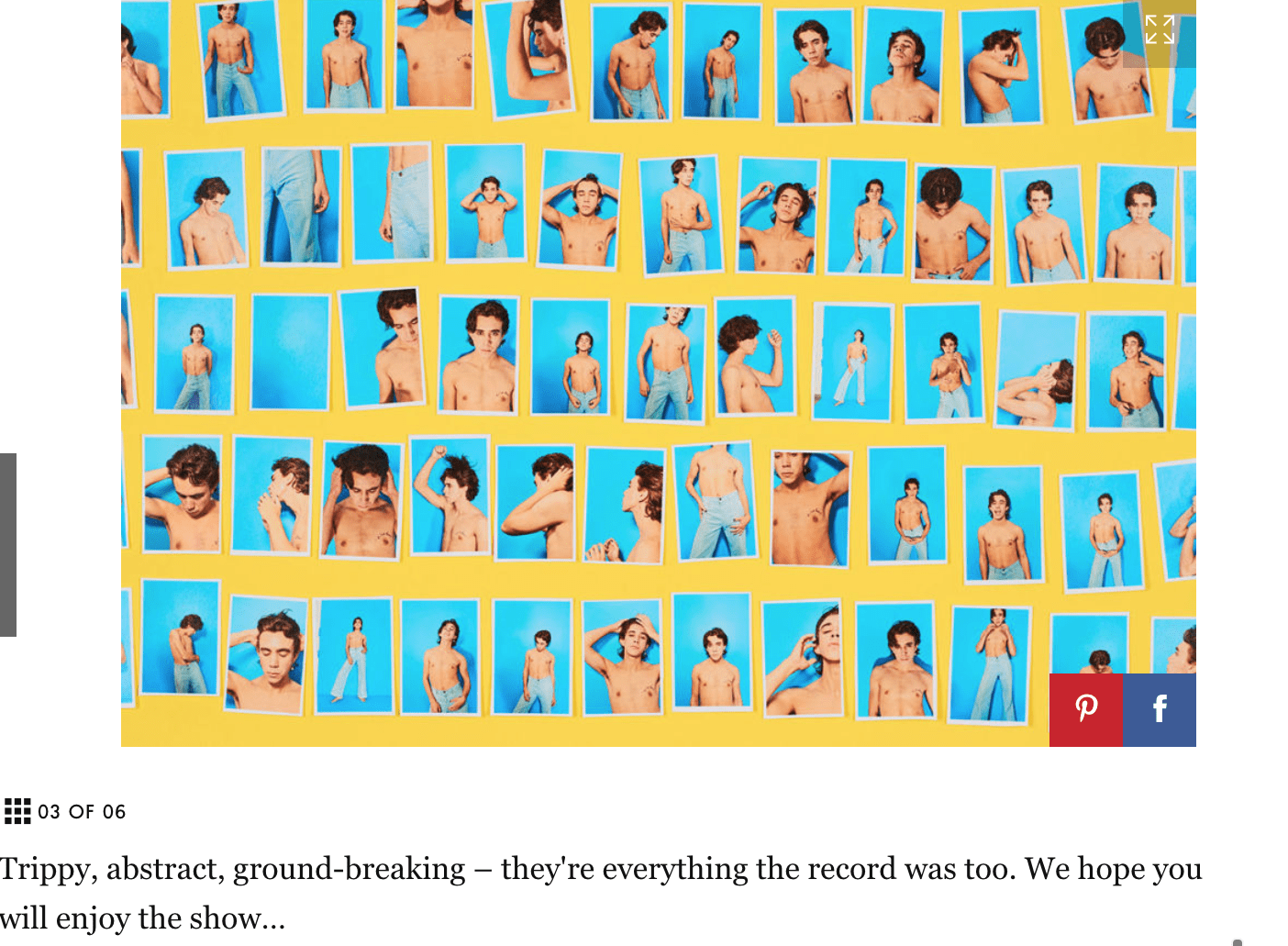 The exhibition kicked off with an opening party and in true rock’n’roll fashion, came to a close with another party. ‘Because why not? Just do it again! Maybe it’s got something to do with going to Ibiza quite a lot, they always have closing parties!’ Dean told us.

The closing party saw us dancing the night away, with Chalkley kicking the party off behind the decks (one of his many talents). In the basement, there was the added treat of a projection bringing the artwork to life. 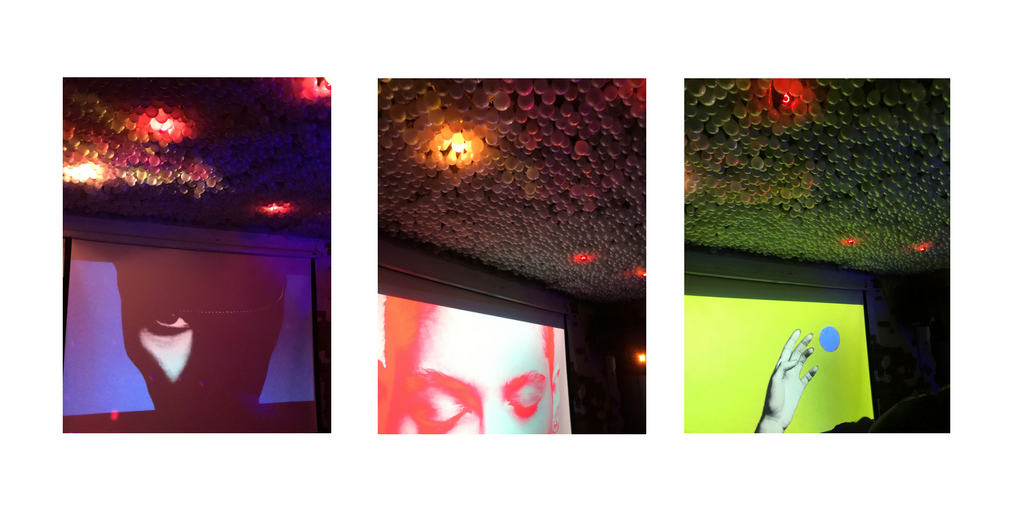 We met with Dean again to reflect on their Reverberation experience and find out what they’re up to know it’s all over. Unfortunately, Ciaran couldn’t make it this time due to that horrible winter lurgy (Feel better, Ciaran!)

In our last interview, we spoke to the duo about the pressures of getting everything completed on time and were surprised about the relaxed response we received considering the quick turn around for the exhibition.

‘Yeah, the most dramatic moment was clearing up just before everyone walked in because, when you put something on like this, you’re quite conscious. It’s not being arsey… you see things that other people don’t see and you don’t want to obsess over those things, but you do have to manage’. I’m sure anyone will agree that, if you put your name on something, for the world to see, you want it to be right. But, as Dean explains, there are limitations,  ‘You want it to be in your vision but at the same time you have to flexible. From a production point of view, you don’t have an unlimited ability to do anything, there are certain margins you have to work in, but I like it.’ – something to bear in mind when picking a location for an exhibition.

Have you looked at how many pieces you sold?

‘We sold a few which was nice’ Dean tells us, however, this isn’t the aim as he likes to keep his collections together, preserving them in storage with the view that the exhibition could be showcased again sometime. ‘I store all of the collections. As you get older and you do more exhibitions, the monthly rent on your storage gets bigger and bigger… it might even be worth buying a house!’ Dean laughs as he tells us. 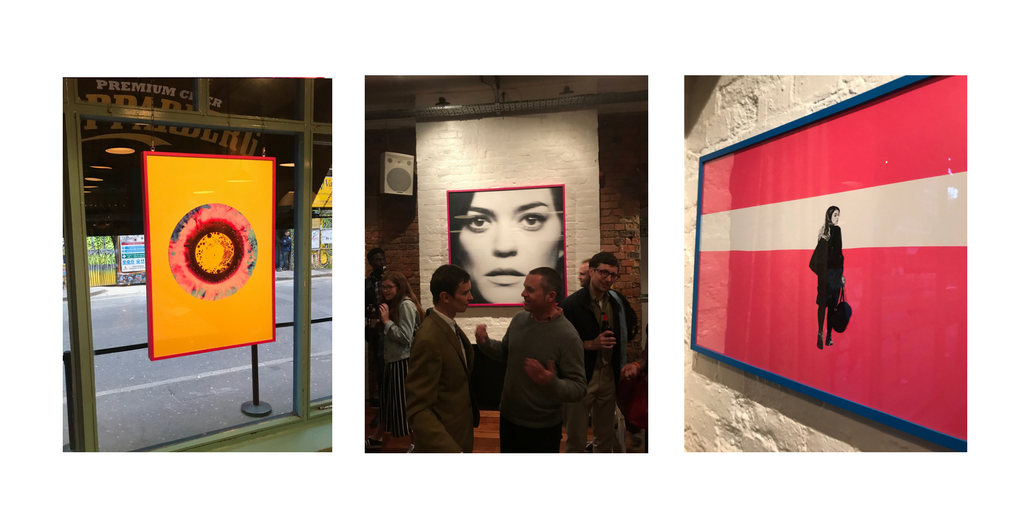 In a nutshell, was the exhibition a success?

‘Generally, it was really good! Sometimes, after a thing like this, you do need a bit of a gap, because to dive straight into the next thing, you need the ability to decompress a little bit and also to get on with other stuff because an exhibition does take up a lot of time, you’re always busy. I did radio show interviews, one with a station called Fubar Radio’ Dean goes on to tell us how he’s been invited back to do a guest show – when will the talent stop!? You can listen to the duos appearance on the station here.

What are you doing now the exhibition has come to a close?

It’s no surprise that Dean is straight back in the photography game now that the exhibition has come to a close, shooting the likes of Lorde and Loyle Carner  – ‘I’m always shooting stuff, last week I photographed Loyle Carner, he’s a great guy’ (we pry for a little more info…) ‘Well I can’t tell you that because it’s not out yet, but watch this space…’  Dean’s music background is clearly a big influence in what he shoots today. Dean also mentions an exhibition he’s currently planning in Arles – no rest for the wicked!

Finally, what tips would Chalkley give a budding artist or photographer looking to put on their own exhibition?

‘Well, I think whether you’ve got money or you haven’t, it doesn’t really matter. Obviously, if you want to do something in a massive gallery it’s going to cost probably quite a lot to put on if you’re going to do a solo show, but there are different ways of doing it. From an absolute novice’s approach, you can exhibit around the corner, find a place.’ Dean says, suggesting that a bit of research and asking round does a long way. He tells us about a place called Trisha’s in Soho London, where he’d exhibited before ‘The best unkept secret’, his exhibition did so well it was extended for an extra month. He suggests that if you want to get your work out there, just do it. Get some friends together, collaborate, approach bars and local spaces and get your work on the walls. Whether your aim to sell your prints, gain exposure or simply have the satisfaction of having your work printed on the walls, there are ways to do it.

If you’re a budding photographer, make sure you enter our Foundation Photography Competition for Young People – Info and enter here.

We always find it so inspiring speaking with Dean Chalkley and Ciaran, check out their websites for more of their fantastic work!